THE PULPIT - Don't Trust the Forecasts

Pat and Pete headed to the Pulpit on a sketchy forecast of clear skies, light lift, and light left-crossed winds.  However, as they drove eastward on the Turnpike cumies began to form and become ever better-shaped as they neared the site.  By the time they arrived at launch the sky was full of well-streeted and reasonably shape clouds.  The wind was light but certainly launchable, albeit with a north cross; not the forecast left cross.

Tom McGowan was already set up when we arrived, and he launched first, ahead of Pete and Pat.  Tom had to wait quite a while for a straight cycle, but immediately climbed slowly, right in front of launch.  He soon beamed out to base at 5,600 msl (4,900 above the valley behind) averaging 350 fpm in the day's best thermal before departing over the back under a well-defined street.  Pete launched soon behind Tom, but didn't get up at launch and had to struggle a bit to do so.  Pat then launched right behind Pete in his new tent-like Falcon 225 and climbed out almost immediately, accompanied by two eagles.

Pete finally climbed to join Pat and they left together under already less well-defined cumies, wandering a fair bit chasing lift.  Pat did a good job of staying with Pete for over ten miles before they became separated and Pat finally landed on a friendly Mennonite farm southeast of Chambersburg for 18 miles and 1:26 in the air.

Tom continued on ahead of them in a rather more direct line, flying straight towards his goal of the High Rock lz, which he made (27 miles, 1:42) after only once getting down to 1800 agl.  After Pat and Pete separated south of Chambersburg Pete began a weird, arcing southern detour chasing the ever more short-lived clouds.  Only when he got near Waynesboro did he finally find a climb that started weakly but eventually got him to base.

That cloud was part of a street heading towards his chosen destination, the Fairfield glider port on the east side of South Mountain.  Leaving at cloud base for a ten mile final glide, Pete just made it to the airport, having had to fly around the Liberty Mountain ski area’s hill to get there (34 miles; 2:24).  After landing, hang glider and sailplane pilot Danny Brotto ran out to greet him.  He then fed Pete beers in his warm trailer as he waited for Bacil Dickert to come and get him after first picking up Pat and Tom. Thanks, greatly Bacil, we owe you.

It was a ludicrously fun day, made all the more so by the utterly unexpected nature of the conditions.
at 12:14 PM No comments:

Meeting - We agreed to provide calendars and hams to the same set of landowners as last year.  We also discussed the upcoming project to replace planks on the trestle into the Zirks LZ, although that project is on temporary hold as a portion of the road to the trestle is currently blocked by hay bales/rolls.

Club officers for 2015 are as follows:

Treasure's Report -  Send In your DUES - To J.R

R, Ben, LE, Mark Gardner, Greg and Pete went to the hill on a beautiful, blue fall day, albeit one with very light left-crossed conditions.

After  trimming the high brush in front of launch, using ropes to keep from falling over the cliffs, the site is a lot safer.

We may have erred by first clearing launch, but the launch was grown up badly enough that it really was needed.

Unfortunately, by the time we were finished working the winds had lightened further.  It was nearly hopeless as the lemmings all approached the edge and jumped.  Ben went first and had a short soaring flight, while LE had a somewhat longer one that included a thermal to an astounding two hundred feet over launch.

Then began a series of sled rides of varying duration, but sled rides all.  Pete was last off, test flying John’s new U2-160  (Note: all gliders must be flown by the dealer before delivery to the customer) (but you probably knew that)  and expecting a sled ride as well.  But he masterfully eked out five minutes on the main ridge before losing it there and heading for the lower southwest cliffs. There I got another five minutes of desperate scratching below the top before being flushed off it.  Flying out towards the inevitable landing, at 400 feet he ran into a thermal that got him back onto the SW cliffs where it was now easily soarable.  He finally landed after fifty minutes.  The U2 flew really well; John’s going to love it.

The first batch of pix from Pat H,.

As you doubtless recognize, the first one is of the Sangre de Cristos range from the middle of the valley during Pat's flight from Whale onto the Sangres.  I believe all of the in-flight pictures were taken on that flight. 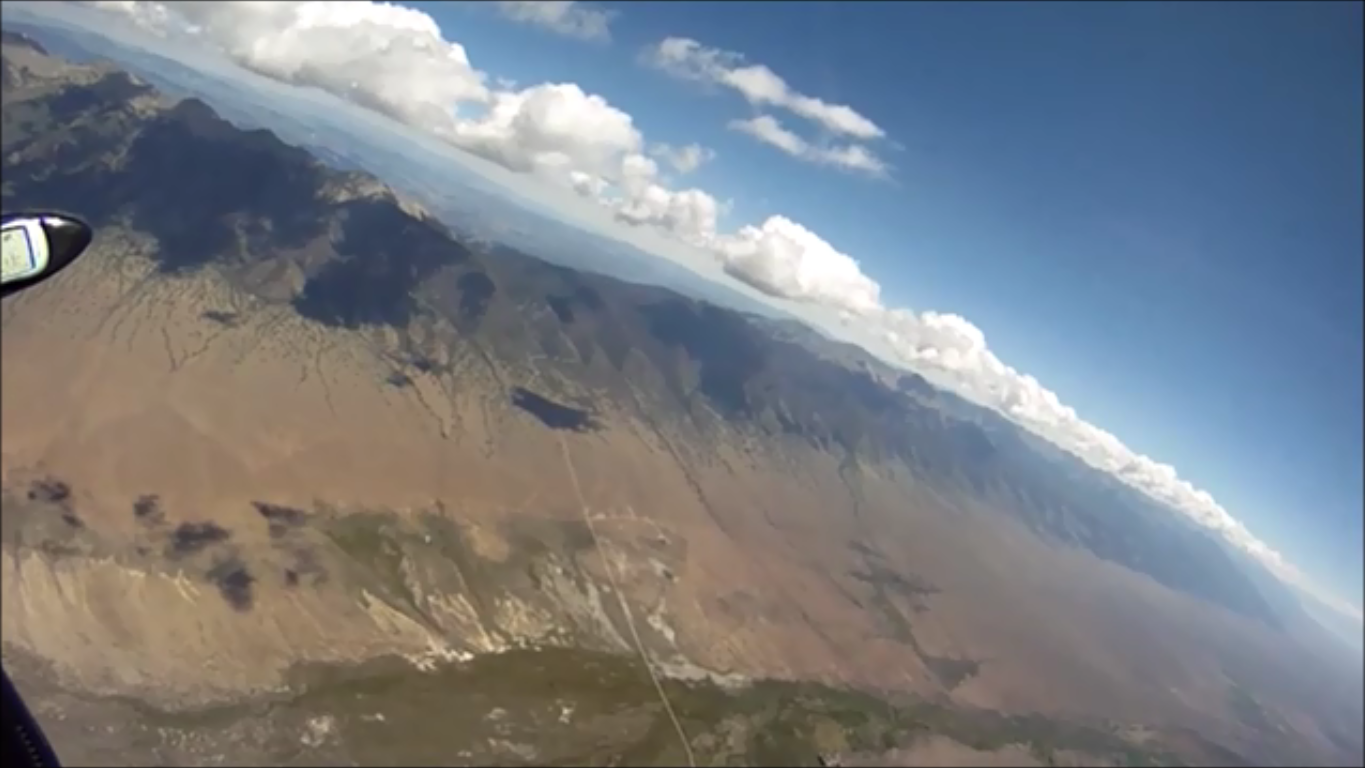 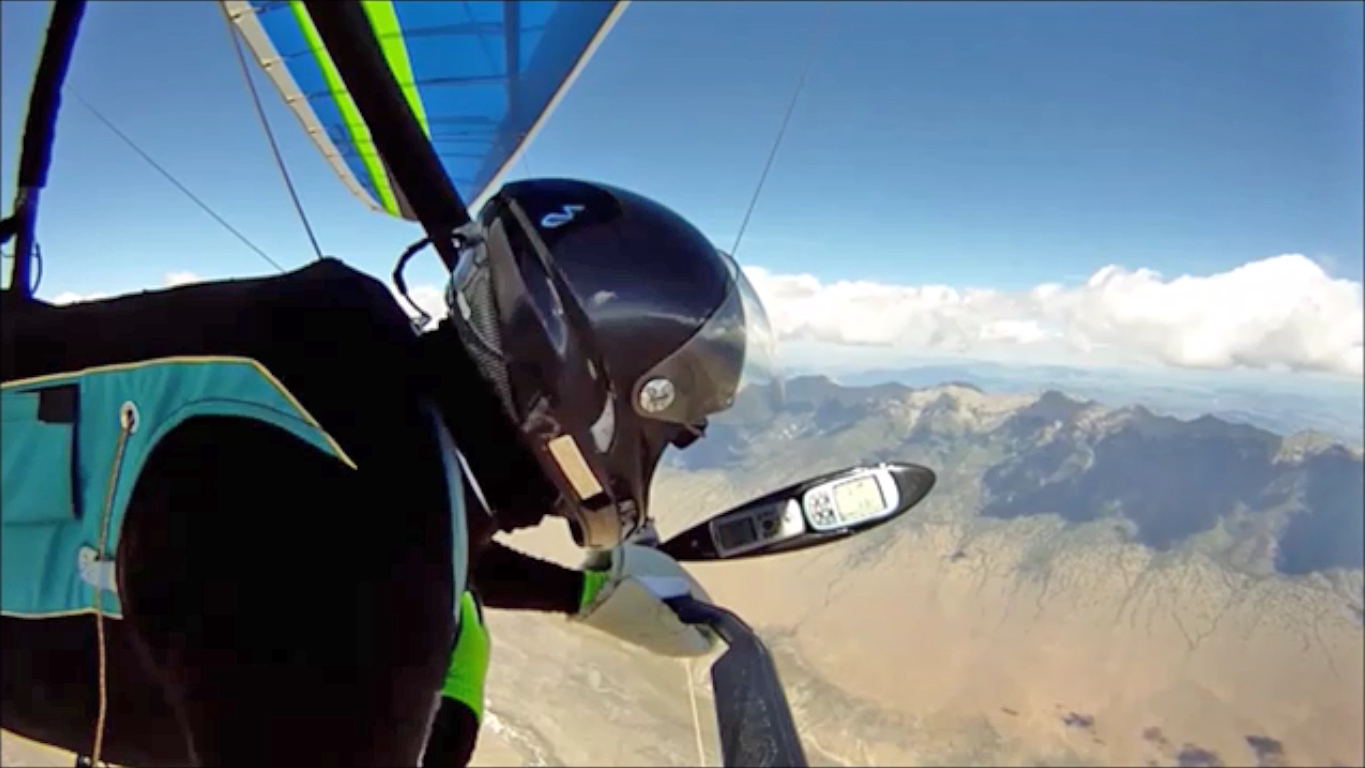 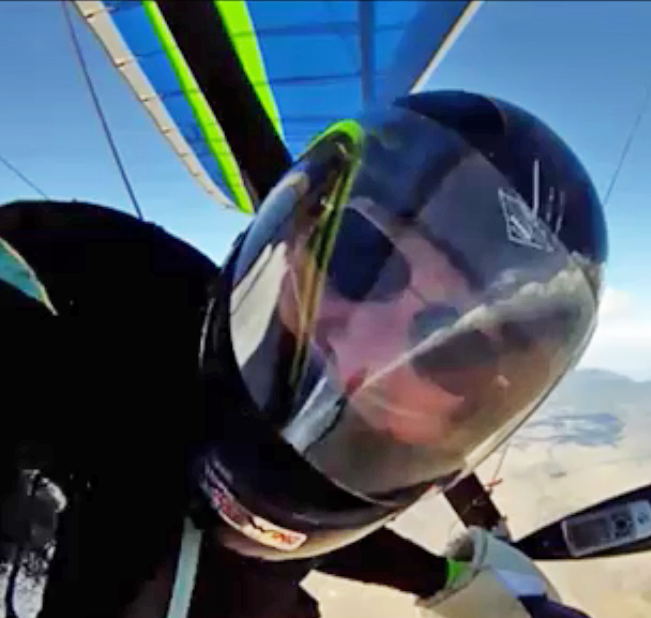 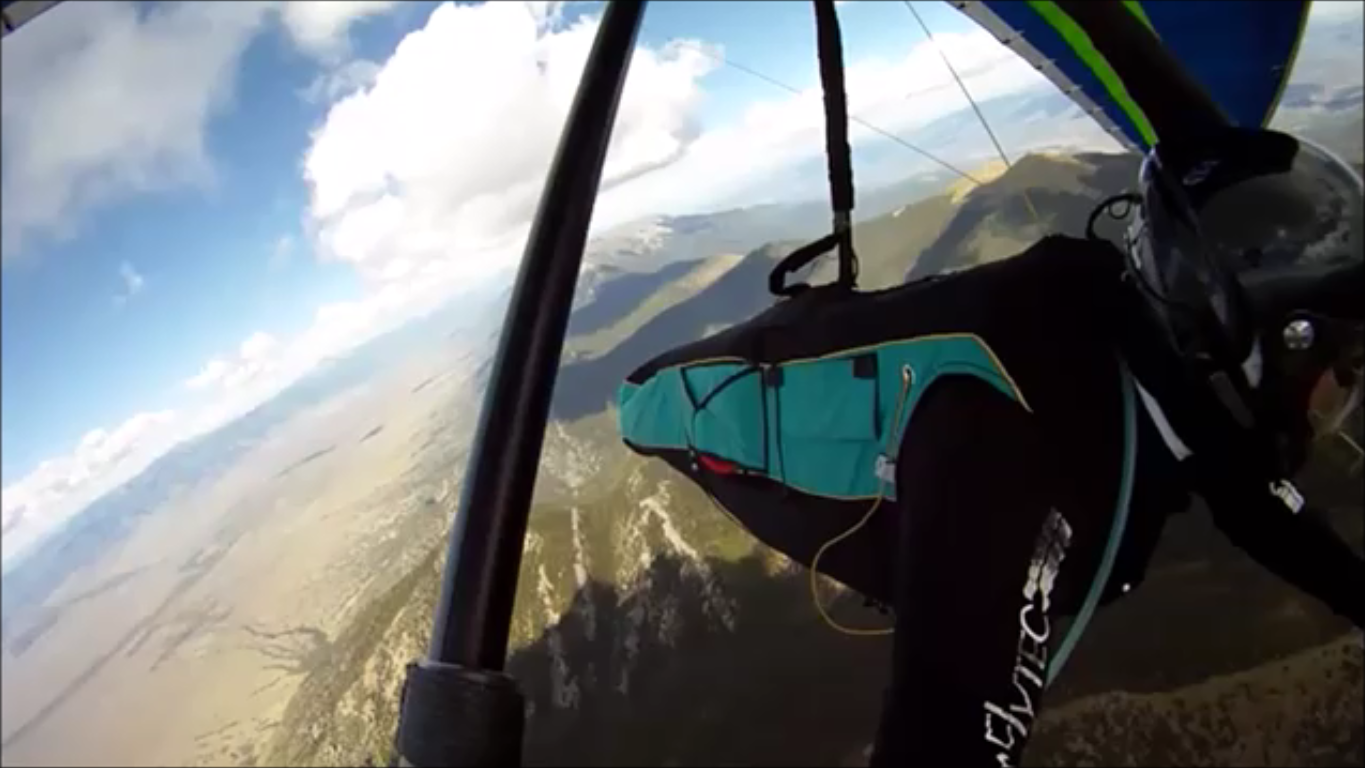 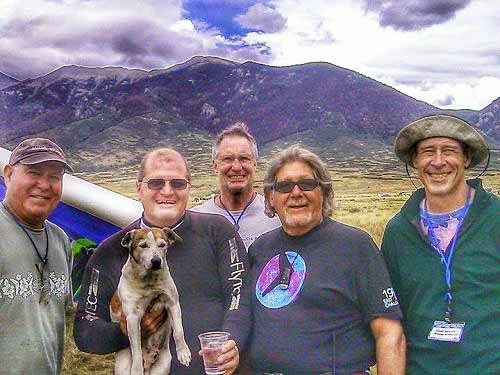